When I read that countries were starting to open borders again (especially to UK tourists), I was desperate to get away. I was sick of being stuck in Peterborough. I had gotten back to Peterborough on March 6th and hadn’t been on a flight or even anywhere close to an airport during that time.

Frankfurt wasn’t even on my radar for a list of places to visit, but I had read that Germany removed all restrictions for EU tourists and I decided that I would go. I think it was mostly just wanting to get away from home. The cost of the flight was also a huge factor in where I went – as was Ryanair destinations. I was hovering over the buy button for a few days (doing this cost me an extra tenner. Grrr) but then decided to just do it.

I booked for my 4 days off during the end of June/beginning of July. I did something I wouldn’t usually do and that was to not book security fast track (a wise move) and not book priority boarding. I wasn’t going to book a seat but wanted the window seat and didn’t want to risk a middle seat (something I should have done anyway as the load factor on this flight was 50% at best).

I will add that the cost of the return train ticket to Stansted was more than the flight to Frankfurt. Yep, train travel here in the UK is stupidly expensive. Due to COVID, the restrictions in place mean there isn’t a direct journey to or from Stansted. I had to do Peterborough – Ely, Ely – Stansted. On the way back, it was Stansted – Bishop’s Stortford, Bishop’s Stortford – Cambridge, Cambridge – Ely, Ely – Peterborough. Stansted Airport was eerily quit too. No going through duty-free to the departure lounge which was good as that is my bugbear. Below is how the departure lounge looked at 15:40 on a Tuesday afternoon. Very weird 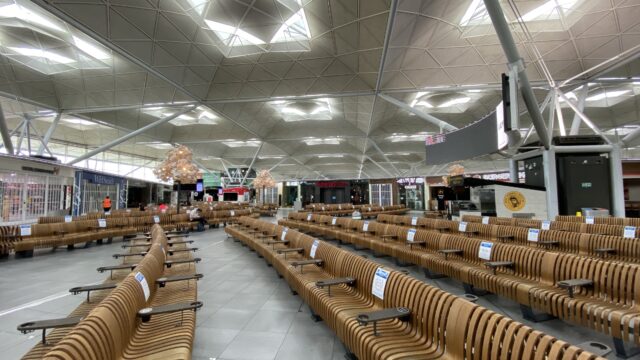 What surprised me about this was that Ryanair flew directly to the main airport in Frankfurt as opposed to the smaller Hahn airport some 78 miles from the city and some 54 miles to the Germany/Luxembourg border.

Frankfurt airport is just 8 miles from the hostel that I stayed at and was fairly easy to get to on the S-Bahn and tram.

The hostel itself must have been one of the only ones open at the time as all sorts of waifs and strays were in the queue to check-in. I didn’t care – I just wanted my bed and to sleep as it was fairly late when I got in.

The room itself was fairly standard. No air con which was rubbish because it was hot. Thankfully it had an ensuite so no traipsing down some manky corridors to go for a shower or other bodily functions. On one of the days I was there, there was a chap from Hanover and I got talking to him and we got on the subject of Armenia and Georgia (he’s been, I’m going). I did something I wouldn’t usually do and we went for some food at a Georgian restaurant. I generally keep myself to myself for stuff like that and generally only swap pleasantries with other room guests.

So, onto what I did for the couple of days that I had here. I did the sightseeing bus (obviously – I am a creature of habit), tram surfing (see previous), walking around (apparently this can only be done on holiday and not at home) and lots of picture taking. I had previously been here before but it was only for a day and it was during winter. You can read about that here.

I had really nice weather and am currently sporting a tan from there. It was also weird to see so many people out and about given the nature of what is happening in the world right now. Thankfully, social distancing was a top priority and mask-wearing was also top priority where distancing couldn’t be maintained.

Below you can see some of the pictures during my few days here.

You can view all of my pics of Frankfurt here.