Poland is somewhere I have always wanted to go, so when I saw that Ryanair were offering cheap flights to Warsaw I decided that I would book them. I first had to get Jamie to come with me (since I knew she would enjoy the history of Warsaw too). This was not a feat that was easy to accomplish. It took the best part of a week for her to agree to come with me.

Weather Tip
Wrap up warm if you go in December – it is cold and windy!

I booked the flights and the hotel and the car hire. The hotel was pretty rubbish – it was in a high rise apartment block (which we are fine with when the flat is clean and has all the necessary linens provided) almost in the centre of town (this was the best bit since it was pretty central to everything).

Our fly in days usually go along the lines of Jamie having a post flight/post headache nap and me off out exploring. Warsaw was no exception. I decided that I would head out on the tram to find one of the Christmas markets it suggested (It wasn’t a very good one – a few stalls on a street corner)

Warsaw Tram Tip
Not all tram stops have ticket machines. You can buy a ticket on the tram, but it will only accept złoty or groszy coins – no notes.

The tickets can be single, 20 minute timed or day/weekly/monthly passes. These have to be validated as soon as they are bought on the tram.

I decided to head to a supermarket too so we could have some dinner. Poland is REALLY cheap. I got some crisps, water, milk, cereal, bread, cheese, butter, chocolate and pop for 38 złoty – which was about £6. To buy this in the UK, you would spend that amount on cheese and cereal alone! 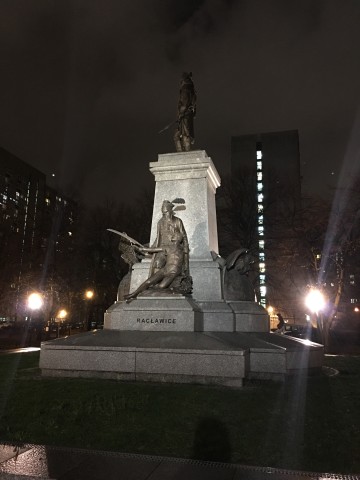 This was one of the many statues dotted around Warsaw.

This is a statue to commemorate the Polish/American hero, General Tadeusz Kościuszko.

It is situated in front of the former Lubomirski Palace.

You can read more about it here

I headed back to the flat so we could have our dinner and chill for the evening.

We decided that heading out to Krakow was probably not the best idea so we made alternative plans.

We decided that on day one we would do the sightseeing tour and head to the old town.

We decided (after speaking with tourist information) on day two we would head out to visit Chopin’s house and then head off to Treblinka.

We decided on day three we would visit the Nożyk Synagogue, Warsaw Uprising Museum and the Old Town before heading off to the airport to come home.

Warsaw Quick History Tip
Present day Warsaw is not as old as you may think.

It was razed to the ground by the Nazis as an example of what happens when you try to rise up against them.

Parts of the Old Town are younger than I am!