I said in my post about the cruise that I wanted to do a whole post just about St Petersburg as we were there for 2 days and we did a lot in those 2 days.

Here is a highlight of what we did for the 2 days that we were there. Click on the images to enlarge them.

Невский Проспект (Nevsky Prospect)
This was the first place we came to on our visit to St Petersburg. It is the main shopping street here. They said it was about 2 miles long. Think of long shopping streets in other countries and this is what this is – oh, and just a tad bit run down too.

It’s not just shopping they have on this street though. They have churches and cathedrals too. This is the Catholic Church of St Catherine. 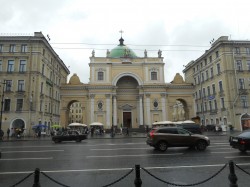 Казанский Кафедральный Собор (Kazan Cathedral)
After we were dropped off in Arts Square we went for a little wonder. It started to rain and we were both unimpressed at being dropped off by this point.

We decided to go for a bit of a wonder and headed down towards the prospect. We crossed the road and went into Kazan Cathedral for a bit of a look around and mostly to get out of the rain.

A lot of the natives of the city come here to seek guidance from Our Lady of Kazan. She is there as an icon to the Orthodox Russians. They come and queue up to get a few seconds to kiss the image and pray. 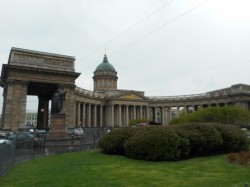 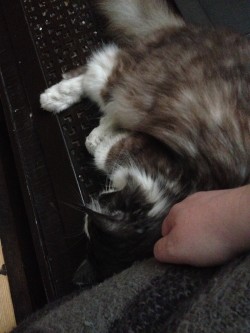 Jamie is a cat lady and that didn’t fail here in St Petersburg. There was a cat that was wondering around and just came and lay by her.

Театр Музыкальной Комедии (Ballet)
After our day of ‘sightseeing’ we headed back to the ship, had an hour or so to get ready for the ballet that evening. I have never been to the ballet before and it wasn’t as bad as I thought it would be.

We saw Swan Lake (what else would you see in St Petersburg since Tchaikovsky had studied there). It was at the musical comedy theatre. We were really close to the stage. We were 7 rows in from the front. We got a fairly decent view and it was an intimate gathering. 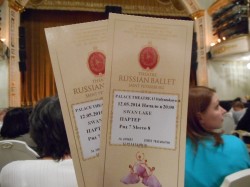 Here is a video of the ballet. We couldn’t get many pictures or videos as we had forgotten our phones and the camera we had was rubbish!

Малая Нева (River Neva)
This starts the 2nd day of our St Petersburg visit. We had a much better tour guide this day as we went with an outside company different from the companies the cruise used. We have used a company called Cruising Excursions before and we decided to use them again. They keep you out for the whole day and know what they are talking about and generally make the day trip worth it.

Our tour guide was a native who was VERY loyal to President Putin. Putting the propaganda about Ukraine aside, she really knew what she was talking about. She started telling us about the city right from the minute we started to drive away from the port. She was attentive to us all too. A huge thumbs up to her.

The River Neva was our first stop. We got to stop alongside the banks of it on a couple of occasions and we couldn’t miss the opportunity for a photo.

Исаакиевский Собор (St Isaac's Cathedral)
Our next stop was St Isaac’s Cathedral. We didn’t get much time here. Pretty much a photo-stop. We did venture out and across the road to take some pictures.

The guide told us “In Russia, the drivers drive when they want and you cross if you can!”

She did tell us a little about it. The only thing I can really remember is that it sustained only slight damage during the bombings in World War II. She told us to look closely and we would see the damage. I’m not quite sure I was looking close enough to see any. 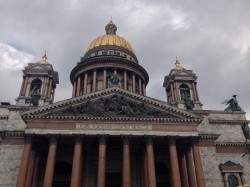 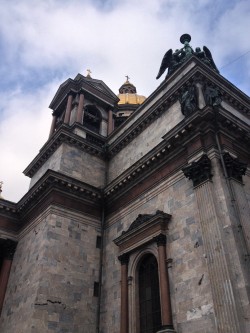 You just have to be there to appreciate the magnificence and beauty of it. It’s one of those buildings you just can’t put into words.

It used to be a cathedral but is now a museum. Sadly, we didn’t have the time to stop and visit inside as the tour timings were strict and the stops we had were fairly short.

Here are some pictures of the Church:

Church on Spilled Blood
Дворцовая площадь (Palace Square)
I think Palace Square was probably the most ornate square I have ever been to. This is where you could see how ornate and vastly over-ornate the state buildings were. On Palace Square you have the Winter Palace and Alexander Column.

The Winter Palace used to be the residence of the Russian Tsars starting in 1760 and ending in 1917. The building was subjected to a storming in 1917 and this is what ended its role as a palace. Part of the building was destroyed by fire in 1837.

The palace is now home to the Hermitage Museum. Our guide said if you were to spend a minute looking at every piece of art, it would take a number of years (I think she said in the region of 5-11) to see everything in the museum.

The Alexander Column is to commemorate Alexander I – ruler of Russia 1801 – 1825. It was built to celebrate the victory of Russia over Napoleonic France.

There wasn’t much told to us about here as the guide we had was an office worker and was doing this to help out.

The inscription reads
The fallen for a great cause is immortal,
He lives forever among the people,
He who gave his life for the people,
Strived, and fought,
And died for the common good

I absolutely loved the time we had in Russia. I just can’t describe how different it is to anywhere else we have been. I didn’t think i’d see anywhere where there is a vast difference between state buildings and residential buildings. The contrast is so vast and so obvious.