The last part of our journey took us from Wales up into Liverpool, Blackpool, The Lake District and The Yorkshire Moors

MapLiverpoolBlackpoolLake DistrictHaworth
Jamie had said that she wanted to go to Liverpool and see the Albert Dock and the surrounding areas as this is where her family from this side of the world sailed from. She wanted to see some of the sights that they may have seen. 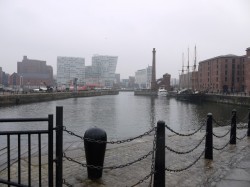 It turns out it was more hassle trying to find the dock. We put the address in the sat nav and it got us lost. By this point we were both frustrated as the sat nav was telling us to go back the way we had come in. We ignored it, drove round and eventually found the dock. 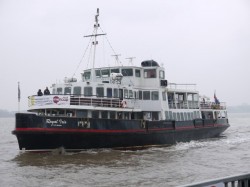 The weather on this part of our trip was pretty rubbish. It was cold, windy and rainy. We had decided that one of the things we wanted to do was take the Mersey Ferry and visit the Tate Gallery in the dock.

The ferry ride was ok, apart from the wind, rain and choppy waters. It took us about an hour on the ferry.

Once we got off the ferry, we felt it only right to go and get some over priced hot chocolate and sandwiches. Which we somewhat enjoyed. After we had finished, we headed over to the Tate Gallery in the dock. It was ok, a lot of pretentious art I though. I’m not one for artsy fartsy stuff like this though.

After we were done there (and I had sufficiently ruined it), we headed out to Blackpool. 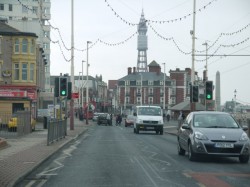 As we were getting close to Blackpool, the tower was coming in to view. I didn’t realise it was the tower at first. It’s shameful to admit, but this is the first time I have ever been to Blackpool.

I have wanted to go for a while as it’s a very British thing to do, but never had. The closest I got to it was watching a show on Channel 4 about it.

After we were sufficiently rested (I don’t think we ever were, nothing quite like your own bed for some good sleep), we decided to go explore Blackpool a little bit. We had planned to got to the tower and to the ballroom there.

We got there and decided that we would go to the top of the tower since we had a discount voucher. They did a 4D experience which was pretty amazing and then we took the lift to the top. It was quite the view from the tower. They had a glass walkway which proved to be quite scary for a lot of the people there. 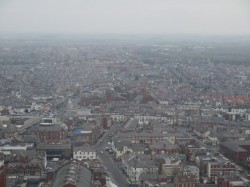 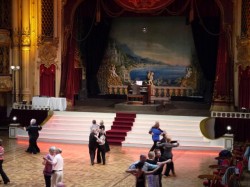 After we came down from the top of the tower and bought our obligatory souvenir magnets (It’s our thing we do when we go on holiday. Got close to 100 of them now), we headed to the ballroom. It was quite nice just to sit there and listen to the organ playing and watching the couples dance.

It was weird to be where they film the finals of Strictly Come Dancing. It was amazing to sit there and think of all the history in the building.

After we left Blackpool, our next port of call was The Lake District – again, my first time there. It’s hard to describe just how beautiful this part of the country is. There were rolling hills and country lanes and lots of sheep. It’s hard to imagine anything other than flat fields after being in the Fens for so long.

I think by this time, the car had had enough and was ready to just rest. We didn’t let her though! There was snow up in the hills, it was truly breathtaking scenery. It was the way I imagined a quaint little part of England would be. 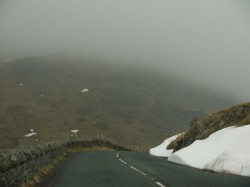 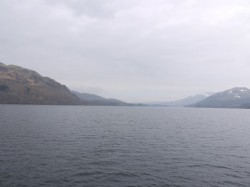 Once we had gotten to Ullswater, we had decided to take a steamer ride around the lake. It was a really cool way to see the lake. It took nearly 2 hours. It started out quite warm, but got quite cold quickly.

The lake was surrounded by high hills and lots of quaint buildings. It is well worth a visit if you ever get to that part of the world

One of the things Jamie and I like to do is visit old churches whenever we see them on our travels. This trip was no exception. We saw it on the way to Ullswater and decided that on the way back we should stop.

We are glad we did. It was a quaint little church. The graveyard was covered – and I mean covered – in daffodils. Not to mention the 4 sheep that were roaming. We got close enough to take the picture opposite. We were able to get within about 5 feet of them before they would move. It was awesome. 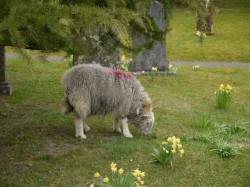 Our final port of call was to Haworth. Jamie had been talking about how she likes the Brontë sisters works and wanted to visit the house they had there.

The hills here were just as steep as most of the other places we had been. Lots of gradients at 20%!

This is the part of the holiday that I feel guilty about. 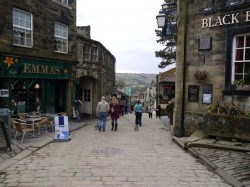 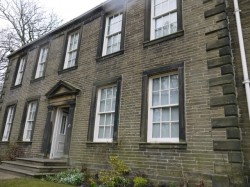 We got to the house of the Brontë sisters and went in and had a look around. I enjoyed the displays more than I thought I would. I spoiled it for Jamie though. She knows I don’t like crowds and could sense that I was uncomfortable among all the people there. I tried not to ooze it though. Jamie felt she had to hurry through and it spoilt it for her.

I’m truly sorry Jamie – it was never my intention to do that!

Needless to say, the ride home was a quiet one!

All in all though, the trip was truly amazing.

I decided to take a panorama on our way to Haworth.