Please bear with me with this post. I was hoping to write a couple of posts and not just the one so need to get everything in order.

I had it all sorted and thought nothing more of it. Fast forward to February end and it all starts to go belly up.

My flight from Milan to Tbilisi was cancelled owing to the Coronavirus. A few hours later I got an email to say that it was still running. A few days later I then got a message from Ryanair to say that my flight from Tbilisi to Milan was cancelled. Nothing changed for the next few days and I had to find a different flight home. I managed to find one that was going via Istanbul (A new country – yay).

I started to keep an eye on the FCO for Italy travel advice. There were 11 towns/cities in the Lombardy region of Italy that was under quarantine. Milan is in the region but thankfully not under quarantine.

My friends and work thought I was crazy for still going but as it wasn’t against all but essential travel, I would have lost out on my money.

I got to the airport and it was eerily quiet. Straight through security (I usually am anyway since I buy fast track) and the departure lounge was eerily quiet too. I had a nice relaxing couple of hours before my flight. I got to the gate and it was empty. The plane was already there and very few disembarked. We boarded really quick and left early and arrive early in Milan. I had a whole row to myself (which is very rare for Ryanair). Below is a picture of what the flight was like. 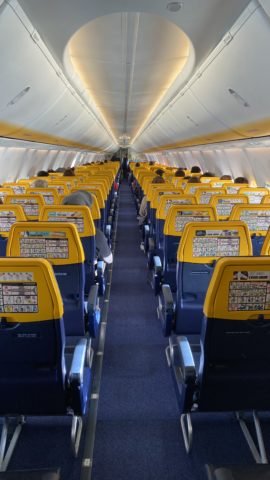 I could get used to the flight being this empty! Once I landed and got to passport control, we were temperature checked by workers in heavily clad protective gear. My temperature was fine and I was on my way to the transfer bus to get to the hostel.

The hostel itself was really nice and one of the better ones I have stayed at. It was decently priced too and the staff were really helpful. I only had 1 day here where I went out and explored. Had I known what would happen, I wouldn’t have spent the second day chilling at the hostel. I did that as on the 6th I was due to head to Tbilisi (more later).

I headed out to get the sightseeing bus and public transport was really quiet. I had read that it was more quiet than usual and it was true. Plenty of seats free and a lot of people being cautious by wearing face masks. Museums were already closed at this point. I got to the office where the sightseeing bus picked up and was told that only 1 line was running due to Coronavirus. I sat on an almost empty sightseeing bus and then got off for some food and picked up the next bus to do another round to get some more pictures. I got off near the cathedral and had a walk around and then headed for some food before heading back to the hostel.

The second day was doing pretty much nothing until the evening when I decided to go out for food. I didn’t go very far as it was raining and I didn’t want to stay out too long as I had to pack for going to Georgia.

Below are some pictures from my full day in Milan.

I left the hostel and headed to pick up the transfer bus to the airport. I got there and went through security and got myself some food and drink. Once I had done that, I went to passport control. This is where things started to get ‘fun’. I got a message from Ryanair that my flight to Georgia had been cancelled. I started to fret and panic about what I would need to do. I went back out to arrivals so I could speak to someone and they weren’t very helpful. I could book a flight to Georgia on a different airline for €200. This would take me from Milan Malpensa to Warsaw, then Warsaw to Tbilisi and getting in at 05:00. I had a flight at 09:00 from Tbilisi to Yerevan.

I called Ryanair and decided to get them to put me on a flight back to Stansted so I could just get home and wallow. I managed to make it home despite having to spend extra on an additional train ticket as the train company would not help.

I now have to deal with my insurance company to try and get what money back I can. Wish me all the luck in the world!

You can view all of my Milan pictures here