Thursday was the last full day we had in Vienna, so we decided that we would tour Vienna that day – turned out not so good since it was raining most of the day.

Because it was raining most of the day, we didn’t really do anything.

We went on the Yellow sight-seeing buses – I didn’t think it was good value for money (Maybe that was because of the rain – who knows!). We had to wait about 15 minutes for the next bus to turn up.

As we were waiting, we were approached by a guy in Opera/Theatre attire. He sold us some tickets to see a 6/7 piece ensemble in a nearby theatre. They were going to be playing some Strauss – so I was sold. Jamie was sold on the opera bit of it. He sold us the higher priced seats at a “discount” as he was selling out fast! Whilst it was good to see, it was not worth the €84 for the tickets to see an amateur ensemble play Strauss and Mozart. We couldn’t even take photos or videos when they were playing!

Because of the rain, the windows weren’t open and the top wasn’t down on the bus – this means that there are not a lot of pictures from Vienna. Lovely rain… NOT!

We got off at Schloß Schönbrunn and had a look at the market there. There were a number of school groups visiting the market here. I also wanted to stop here as Andre Rieu played a concert here and the surroundings were beautiful (I guess TV does that – although it was stunning but wet).

These are not the best Christmas markets we have been to.

We stayed here for about 30 minutes and then got back on the bus to go round the entire route. Jamie decided before we came on the holiday that she wanted to do the Rick Steves audio walking tour of Vienna. I wasn’t much up for the listening bit, but I was up for the walking round bit (This was a bain of contention for us).

We found a shop that sold headphones and we both got some that would fit our ears better than the ones we had. We found them (after being in the store for 20 minutes) and embarked on the walking tour.

It was supposed to take us round several stops in Vienna – but we ran into a rain problem again and got as far as Domkirche St. Stephan before we decided that we would head back to the bus. We stopped inside the cathedral for a few minutes of respite from the rain. We were also told to look out for a gelato shop here but we couldn’t find it – too cold for it anyway! 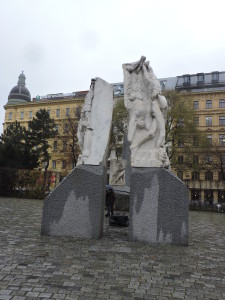 One of the saddest street monuments I have come across is here in Vienna.

There are 4 carved granite columns (the granite comes from the Mauthausen Concentration Camp near Linz in Austria). Behind and to the middle of 2 of the columns is a cast iron statue of a Jew that was forced to clean Anti-Nazi slogans from the streets of Vienna after Anschluss. This statue showed just how much the Nazi’s were prepared to degrade and humiliate the Jews and those not of the Aryan race.

As we were heading back to the bus, we found some Italian eatery that we stopped at to get some lunch and some more rain respite. Again, it was good to get some food but it wasn’t worth what we paid for it.

We set off again for the bus and got on a different route this time. The driver didn’t know what he was doing when it came to the windows. They were down enough to stick a camera lens out for pictures (although this didn’t go according to plan as the lens got wet). On different parts of the tour, he put the windows down entirely, and then up again, and then down again, and then… you can see the pattern emerging.

I wish I could’ve gotten pictures of all the lovely architecture in Vienna – there is a LOT of it.

We got off the route and went back to the hotel to warm up and dry out before we headed out to the Rathaus Christmas market and then on to the theatre.

We finally decided to try some Kinderpunsch – this is the alcohol free version.

Kinderpunsch Tip
They will display the price for this on the stalls.

Beware though: They give it to you in a mug and don’t tell you that they charge for the mug too!

After we were done wandering around, we headed to the Palais Auersperg for our concert. 90 minutes later we were out of there and headed to the tram back to the hotel ready to pack up and leave the next day.

Vienna is not the cheapest place in Europe. In fact, probably one of the most expensive we have been to.

Once we dropped off the car at the airport, we had a not so interesting – or fun at that – time at the gate. We were told to leave the gate – because they forgot to scan us in as we arrived. When it came time for boarding, the gate agent was just horrible. He singled out 3 or 4 people (2 Americans and a Chinese gentleman) for having more than one bag. The policy of easyJet (or the airline that shall not be named [TATSNBN]) is one cabin bag – it is not clear that a handbag/purse is included in the definition of a cabin bag. He asked these people to combine their bags (whilst letting on the EU/Brit nationals with more than one bag that were not in the ‘Smug‘ queue. Jamie made me proud at this point – she questioned the gate agent letting others on with more than one cabin bag. He walked on the bus and back off again and said those people would repack on the bus – a FULL bus at that. How dumb does he think we are!

He said that Jamie would have to check her carry on bag and this kerfuffle went on for 15 minutes before he decided to just let us on. It was a nightmare. Now, here’s the best bit – if Jamie had put her handbag in a duty free bag, it would have been allowed on. And another good bit – there were at least 12 empty seats in the rows in front of us. Thanks TATSNBN and Vienna gate agent for a truly wonderful gate and boarding experience!

All in all, Vienna was a beatiful city. It’s probably somewhere that I wouldn’t go again in a hurry – perhaps it was the rain, perhaps not.

Here are some pictures from our day exploring Vienna.

You can view the rest of our pictures here