I will start this post by saying that I have been to Warsaw and Kyiv and Chernobyl before.

Back in March time, I got a gift from the Young Un of a trip anywhere in Europe and it got me thinking of where I wanted to go.

I decided on Krakow (guest post coming from him and then my post will follow). I was also looking at other places we could go, and I suggested Kyiv so we could go to Chernobyl. At the time of suggesting this, I wasn’t aware that this was on his bucket list. He quickly said yes, and I began looking in earnest for flights there. I saw that we couldn’t get direct flights as I had done in 2019 so I started to look where we could change and possibly spend a couple of days as part of the trip.

I got out my Excel sheet and several browser tabs so I could check and cross reference and check and cross reference some more. The picture below shows how I did it. There were several European cities we could go to so we could get to Kyiv. I was hoping he would choose Warsaw (I love Poland, I love Warsaw) and he did. I wanted to be the one to take him to Poland first, but other friends beat me to it. Tsk tsk! Rude right!!! 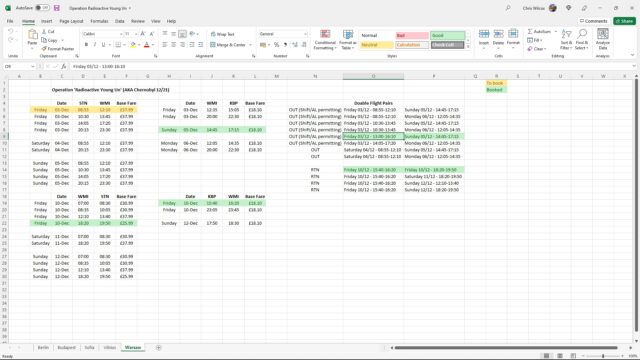 Please take a moment or two to appreciate the meticulous planning of it. Notice the only tab I show was that of Warsaw because that is how we did it.

Right, enough of the admiration. Now to get on with the rest of the post.

It seemed to take ages to get to the dates for Krakow but as soon as that was done this trip arrived super quick. We decided he should do the rightful thing and get up early and drive up to me to pick me up (rather than me go to the airport by train). He called as he was around the corner, and I answered like I had just woken up and still had to shower. Truth is – I was already ready and waiting in the kitchen for him.

The drive to the airport was pretty uneventful until it came time for the junction we needed, and we just went straight past it. We had to drive another 15 or so miles until the next one and turn back on ourselves to the car park. I checked and realised I had booked 2 extra days parking (this may have come in handy for the return – more about that later).

We got the bus to the terminal and got through security and chilled until flight time. I was telling him how small the airport was in Warsaw but I’m not sure he realised just how small it was. When he went there, he flew into Warsaw Chopin and I have only ever flown into Warsaw Modlin as this was the price range for me. We landed and went through passport control and out to wait for the FlixBus. We had about an hour to wait. I thought I saw our bus, so I dragged us outside and it turns out it wasn’t ours and ours was delayed by about 20 minutes. We went back to the warmth of the airport and waited until the tracker showed that it was just approaching the airport before we went back out.

The bus to the tram/metro stop was easy and uneventful. I may be lying if I said I didn’t choose this stop (well, I let him choose really) because of the trams. I need to get him immersed in his fear, so it doesn’t scare him any longer. A fun thing for me to do is to send him pictures of me standing on the tram lines or videos of me crossing them (this was no different here either. I must do it for the tradition at this point).

We had to change trams to get to the hostel. I was able to remember how to get around like I lived here. I’m thinking Jason was secretly glad that it was like that so that he didn’t have to direct us.

We dropped our stuff at the hostel (after walking around the long way) and then headed out to get food and have a wander. I felt like a tour guide as I was telling him what was where and what stuff was. It was also nice to see him recognise places from the last time he was here.

Jason said that he was happy to be there with me as he was getting information about things around and I was so happy that he trusted me enough to give him information and to show him round.

We had a wander back around the old town before heading to get some sleep ready for the early start tomorrow and the walking tour.

///yarn.pelted.sifts
A Footbridge Of Memory

///brains.bedrooms.mailbox
Monument to the Warsaw Uprising

Stopping Points on the Chernobyl Tour

///cylindrical.hairstyle.vole
Monument to Those Who Saved The World

We got in and went through security and then passport control. Everything was standard and uneventful at this point. We got to the gate (thankfully not a million miles away as is usual for Ryanair) and then found some sustenance. As I came back and sat down, I had a look at the Ryanair app to make sure the gate hadn’t changed and this is when the fun started. The flight was showing with an estimated departure time of 16:45. We were due to take off at 15:40. I told Jason and I could see the panic set in. He’s a young socialite you see!

I got on with Ryanair chat to see what would happen if we missed our flight from Warsaw to Stansted because of this. Thankfully they said they would put us up and feed us until the next flight the following morning. I didn’t want to stay in Warsaw because they would put you in a hotel in a small town near the airport – also, I wanted to be in my own bed.

As we were starting our initial descent, he found Jason and I seats in row 29 and the overhead locker space along with it. We were so grateful for all the help they gave us. We ended up being one of the first passengers off the plane. Jason ran towards the door for immigration, and I walked as fast as my fairly decent legs would allow (I also had the 2 cases). As I was walking fast a woman came up to me and asked if I was cold (I was wearing shorts and a t-shirt. No leg prisons or arm prisons for me) and I told her no. She started asking where I was from. I was polite but thinking I wish she would stop talking as I needed to concentrate on getting to the door and through immigration and out the other side to get on the plane for Stansted.

We had to wait for the airport worker to open the door and the time seemed to be ticking down fast. At this point, we had about 20-30 minutes to do all the admin and get on the plane. We ducked under the barriers and were the first two through and then we dashed to security – of course, there was a queue. We tried to squeeze through, but people seemed to be going slow. Jason just barrelled on through and was through before me. My tray had to get screened again as the laptop needed to be in its own tray. Once this was done, I didn’t bother packing the stuff. I just carried it round to immigration. I saw Jason on the other side, and he started to go out. The guard at immigration flipped through my passport and was asking me questions. I willed for him to hurry. I then made a stop to get us some water before rushing to the gate and onto the plane. We had about 6-8 minutes before we were due to take off. We were lucky to make it.

At this point, Jason told me he could’ve killed me when he saw me go into the shop. All that fast pace made me thirsty. He said he didn’t care and would’ve gotten me a drink on the plane – way to tell me the rules afterwards like! I was so glad we would be home that day. We finally relaxed and I think we both slept a little. Jason played Solitaire earlier and beat his previous score and said the trip home would only get better from that point. He was right (yeah yeah, don’t tell him though).

Below are two pictures of Warsaw Modlin airport. The first is to show the overall airport (terminal/taxiway/runway). The second shows where we went when we were inside the terminal and how small it really is. The 2 hours between landing and take-off would have been more than enough time. 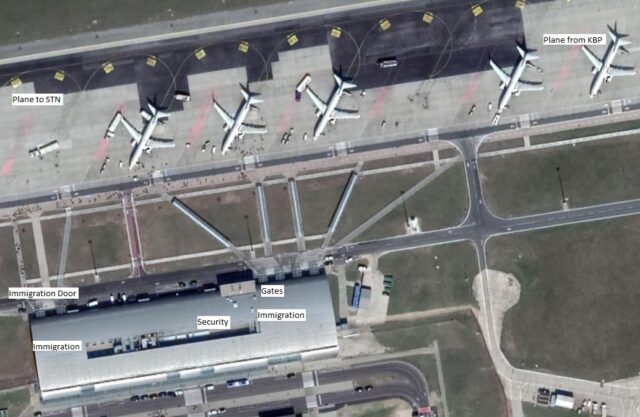 Getting through immigration at Stansted was a breeze and we got to the car just fine and then stopped for some embassy food. We were so happy to be in the car driving back to mine and then him back to his.

All in all, it was a great trip (despite a dip in my mental health). I enjoyed every second of it. I am so glad that I was the one to be able to help him tick off another bucket list destination.

You can view all of the Warsaw pics here

You can view all of the Kyiv pics here

You can view all of the Chernobyl pics here